Index A to Z: Art, Design, Fashion, Film, and Music in the Indie Era 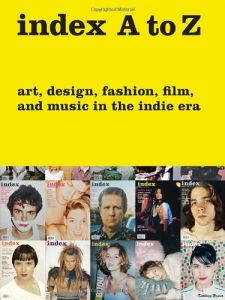 The bible of indie culture. index A to Z celebrates the uncompromising personalities, humor, and DIY brilliance of the indie generation and captures the spirit of the era with sections like F for Fashion, featuring designers Kate Spade and Marc Jacobs; I for Indie with Harmony Korine and John Waters; and others such as Royalty, Vanished, and X-Rated. Paying homage to Generation X’s “It” glossy, this volume is packed with index’s most memorable interviews and greatest photographs of the time, including previously unpublished outtakes and party pictures.

Beginning as a low-budget, oversized fanzine in 1996, index magazine quickly became one of the most influential small publications in the United States. With a smart and irreverent voice that epitomized the late ’90s indie ethos, the magazine brought together some of the most relevant cultural figures who were at that time young and often unknown, and who have since become cultural icons or celebrities, including Bjork, Scarlett Johansson, Alexander McQueen, and Ryan McGinley, to name just a few. New interviews with founders Peter Halley and Bob Nickas, a reminiscence by Bruce LaBruce, and a historical overview by Wendy Vogel offer further looks behind the scenes.