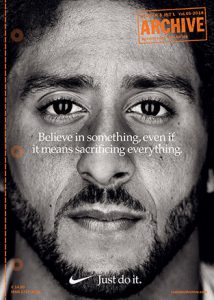 Nike’s and Wieden+Kennedy’s move to put ex-NFL player Colin Kaepernick on one of its current posters and in its latest commercial, was a swift and risky decision, that we decided to honor by featuring this campaign on the cover of our current issue. Kevin went famous, when he chose to kneel on a knee rather than stand while  the US national anthem was being played before the start of NFL games, in order to protest at police brutality and racism. Other players followed his example, and this movement divided the US. After a inferior start, the campaign gathered pace, and Nike’s stock rose to an all-time high.

It is pure coincidence that the main interview, titled „Photography has been evolving since the time it was invented“ was conducted with one of the most venerated of sports photographers, John Huet, who made his mark with Nike – no fewer than 23 years ago.

As for the current issue, you will find a total of 83 print and 36 film campaigns. The creatives responsible for the Digital selection, that features 15 works, as usual, were Rafael Segri and Kiko Mattoso, a couple of Brazilian CDs who both work at Saatchi & Saatchi, The interview we did with them is titled „You don’t settle for a good idea, you chase after a great one.“